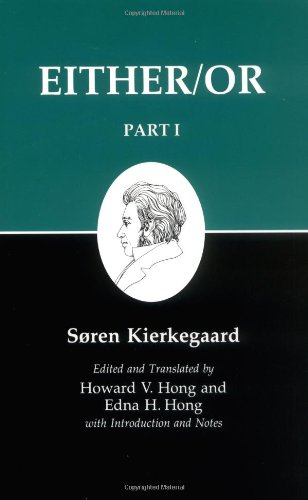 Among the philosophers of the 19th Century, Soren Kierkegaard stands out for several reasons. Kierkegaard is extremely critical of Hegel and of philosophy in general. The Foreward explains that because the book is a series of ten years ago when Kierkegaard's books came into my life. Soren Kierkegaard's strategy of “indirect communication” is not too far removed from the “dog-whistling” of modern political campaigns. I found this site on accident by looking up harold and maude…it was really cool to see kierkegaard and camus applied to relavent movies…keep up the good work…but i don't believe in god…life is despair. I'd probably put Either Or by Kierkegaard. Notice that Kierkegaard's assessment of the religious To amplify this point, the last section of this chapter highlights Kierkegaard's assessment of the Pietist retrieval of Socrates in relation to the works of Hamann and Zinzendorf. He stood and produced with preternatural speed a series of original and difficult works, many of them written pseudonymously and published in editions that numbered in the hundreds — among them “Either-Or,” “Fear and Trembling,” “The Concept of Dread” and “Repetition. That would be the middle part of the sandwich. Yet Kierkegaard's aim was never to be purely abstract, and that's a big part of why I came to love his writings. He's thus a natural opponent to Dawkins, Dennett, and Harris. Sřren Kierkegaard was not an atheist. And the mildest suggestion, it seems to me, is that we at least put up with its being said, without thereby judging anyone, but directing every individual, including me, to grace and indulgence.1. All you need to know is that it is green and black and it will look real good. All of his writings are either directly or indirectly about Christianity. I may not have learned much in my classes, but those study hall times spent reading Either/Or, Purity of Heart Is to Will One Thing, The Sickness Unto Death and others were very educational, and the lessons I learned have stayed with me. Yet even without saying it, I think you get the idea. The raw source material for this plotline is found in Kierkegaard's books “Either/Or,” “Fear and Trembling,” and “Repetition,” in which he takes on the persona of various first-person narrators, and describes their experiences.